Wheeling, IL Platinum Pool surpassed its peers to win a prestigious industry design award from The Association of Pool & Spa Professionals (APSP). The Wheeling, IL-based company received an APSP International Award for Excellence for their outdoor living project in...

When considering a swimming pool construction project, homeowners can often get overwhelmed with details.  Thinking about pool types, pool locations, equipment and material choices, selection of a contractor, the permit process, costs, etc. can make some potential swimming pool buyers run away and hide; i.e. cancel the project altogether.  This post from River Pools takes the whole process back to basics, and answers 4 basic construction questions that will help build a foundation for a successful project.

11 Jul How much ice would it take to cool down your swimming pool?

by Matt Giovanisci, Swim University July 10th, 2012 We've been hit with a heatwave in the US and it's getting harder and harder to keep cool. Especially when you're swimming pool is now 90 degrees from all that heat! What... 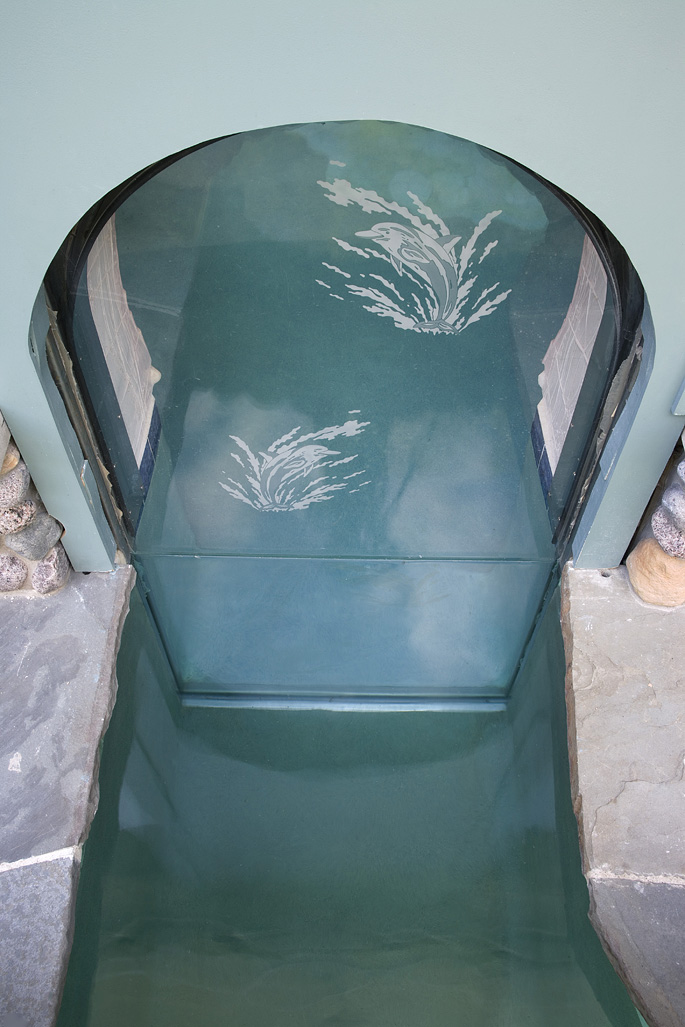 As you might also recall from the February 2008 feature, figuring out how to separate the indoor and outdoor pools proved to be a surprising challenge.

The swim channel under the clamshell was intended to allow easy access between the two pools, but the client (who knows as well as anyone how raw the winters can get in the Chicago area) wanted to be able to close the channel off when the weather turned cold.

That seemingly direct thought resulted in a three-year odyssey that led us to multiple engineers and system fabricators in quest of a workable solution. The irony is, what now appears to all the world to be a simple, retractable acrylic panel – perhaps the least visually arresting element in the entire project – was by far the most difficult effect to achieve.

For nearly six years, this was a project that occupied most of James Atlas' working life, challenging him and the staff at Platinum Poolcare Aquatech with pursuing development of a watershape complex marked by great ambition, shifting needs and innumerable revisions. Now that his work is complete and the site is finally ready for its close-ups, Atlas guides us through a masterpiece he justly sees as his firm's crowning achievement. 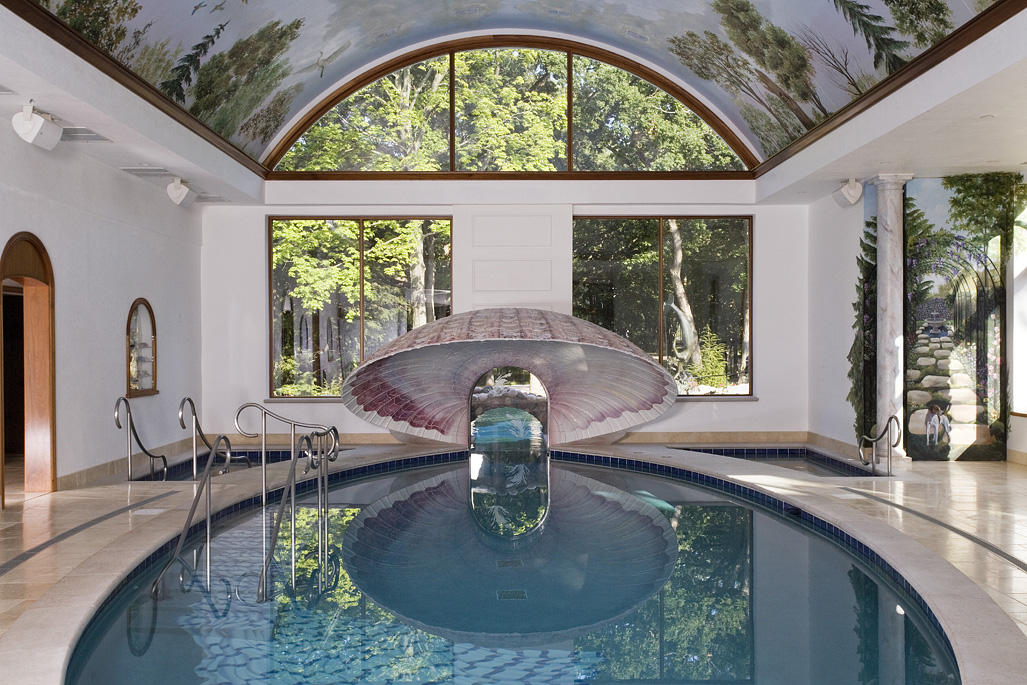 Most of the time, residential construction projects that stretch beyond a half-decade in the making involve significant delays or work stoppages. The project pictured here known hereabouts as "The Shell Pool"– took nearly six years to complete, and what's unusual about it is that it was basically a continuous effort. Even when we weren't on site, seldom did a day go by when we weren't deeply involved on some level in design work, engineering and/or project planning.

Now that it's finished, I can say without hesitation that this was the most detailed, refined, all-consuming project we at Platinum Poolcare Aquatech of Wheeling, Ill., have ever tackled. I can't begin to calculate the collective number of hours spent in client and staff meetings, phone conversations, skull sessions and design-revision meetings – and that doesn't include time spent on site in bringing this amazing project to fruition.

Even compared to the many intricate commercial projects we've worked on through the years, this one set a new standard in my experience with respect both to the spirit of innovation and the mountains of patience required to get the job done. Today, with all that effort behind us, it's a rare pleasure to step back and get an overview of what we've accomplished – a pleasure I'd like to share with you here. 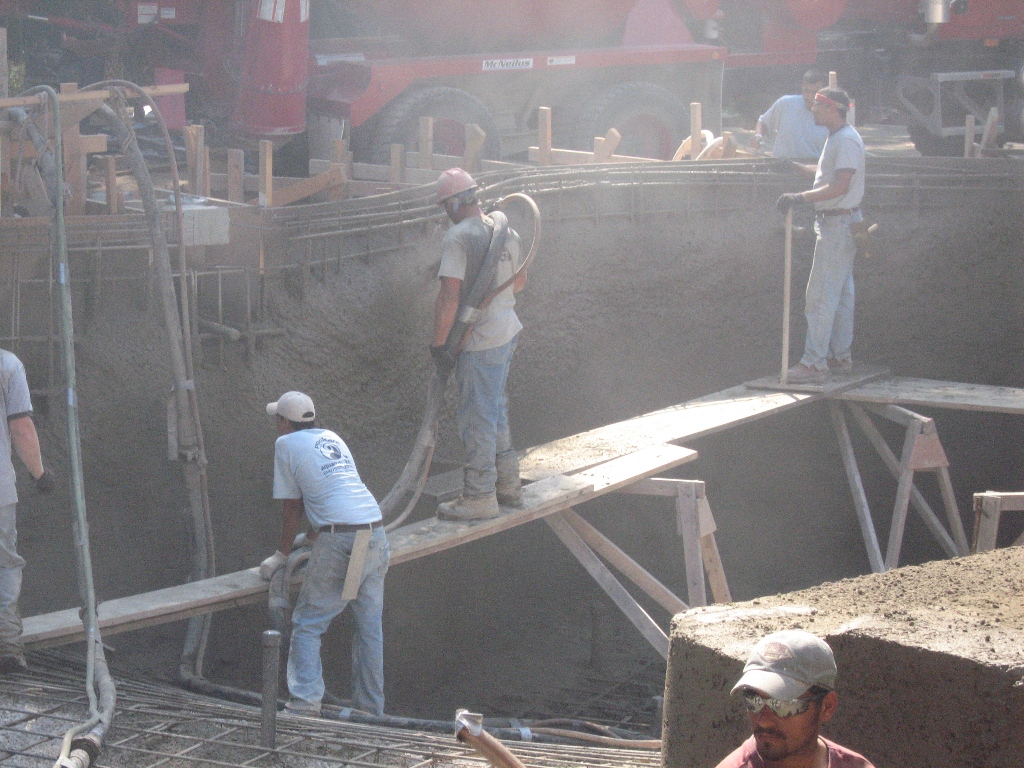 Indeed, it wasn't long before we were very happy we'd provided room for expansion: After we'd set up and buried the outdoor chase under tons of gravel and concrete, the project evolved to include 16 substantial change orders that called on us to use just about every available line we'd set up. What had been just a swimming pool now became a complex including an outdoor hot/cold therapy spa, a play pool, a waterfall and elaborate fire and lighting effects.

The therapy spa is accessed by a set of steps adjacent to the channel leading into the sauna, the thought being to create an indoor/outdoor therapy zone. The spa's elliptical shape echoes the design of the indoor pool, and it features multiple jets as well as tile inlays from Craig Bragdy Design and a pedestal for a piece of sculpture (yet to be selected). 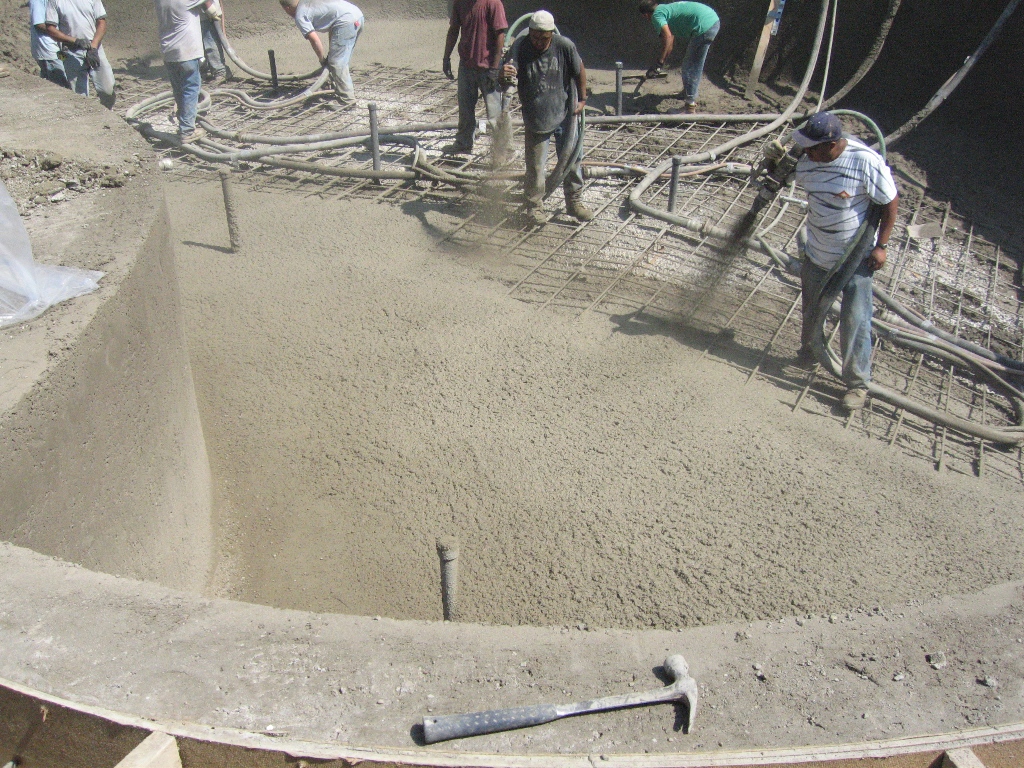 Shooting the outdoor pool was a major exercise in logistics, with multiple crews working in various areas around the site until they all came together to take care of the main pool's huge floor. Once the shell was ready, another stunning tile composition was set in place to mark a swim lane running the full length of the 60-foot pool. 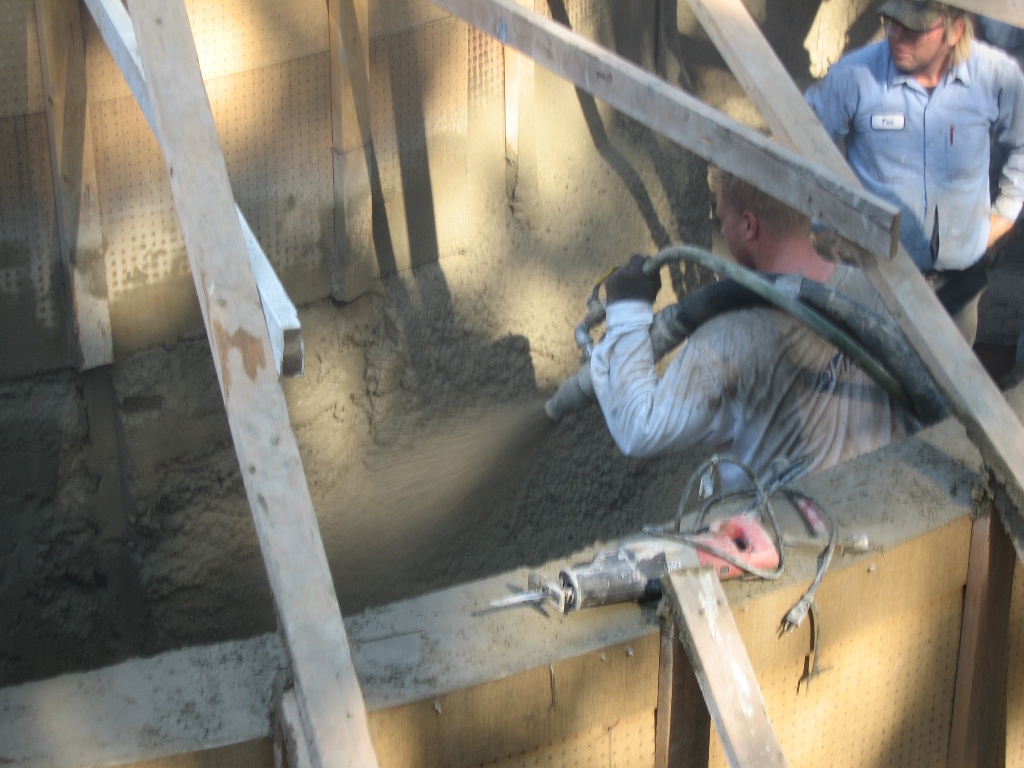 Work on the outdoor pool began while the pool house was still taking shape. Key to success in all subsequent stages was making certain we set things up for plumbing, electrical and assorted other runs – with plenty of...

Shell Games By James Atlas PART III Cracking the Shell Our finish work indoors included installation of the amazing clamshell structure over the swim channel at the end of the pool. Before long, the elaborate tilework drapery was flowing...

This is Part II of long article which was originally featured in a 2009 issue of Watershapes Magazine. They ran the lengthy treatise in two large parts: The first one outlined the planning and actual construction of this elaborate project, and the second took more of a photographic look at the finished product. We will feature excerpts from these articles as a 13-part serial. We will include an embedded video in each of the serial postings of HGTV's Million Dollar Rooms, in which the project was featured. 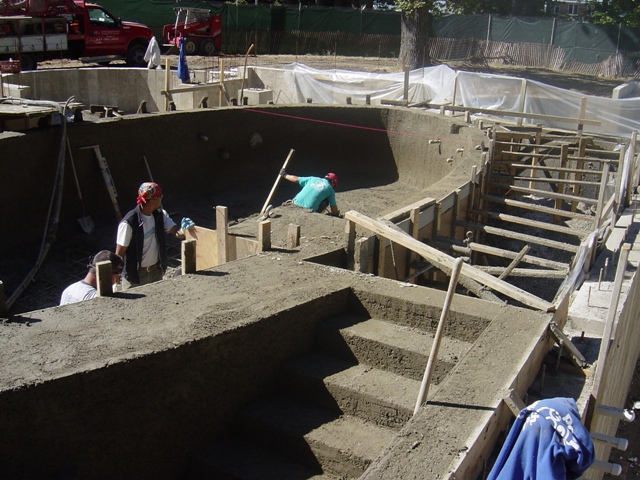 At first, our scope of work was limited to an indoor swimming pool to be installed inside the pool house as well as a freeform outdoor pool. But that was just the beginning, and before long the project grew to include multiple watershapes and a long list of design details. Even for a firm that specialized in outsized projects, this soon became one of the most challenging we'd ever tackled: Truly, it pressed us to our creative and technical limits.

And those were just the key physical features: In addition to those large tasks,we also tackled a seemingly endless string of small details, from extraordinarily elaborate tile mosaics including a coral reef and "cave paintings"in the sauna to a massive, all-tile clamshell that cantilevers over one end of the indoor swimming pool. 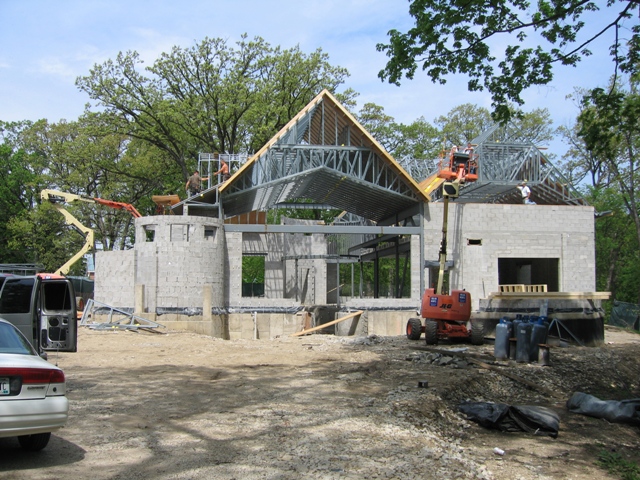 Once we were done with the shell of the indoor pool and its associated waterfeatures, we stepped aside so the pool house could be built over and around what we'd done. 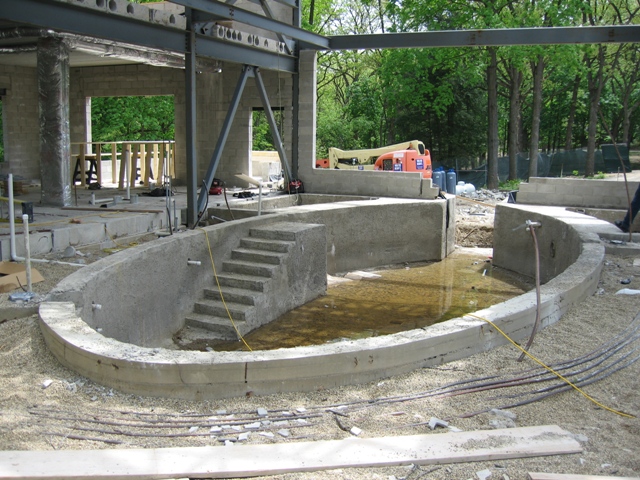 This long article was originally featured in a 2009 issue of Watershapes Magazine. They ran the lengthy treatise in two large parts: The first one outlined the planning and actual construction of this elaborate project, and the second took more...