Our finish work indoors included installation of the amazing clamshell structure over the swim channel at the end of the pool. Before long, the elaborate tilework drapery was flowing down over the steps, and the hard work began of cutting the coping material to fit a range of radii and complex angles. 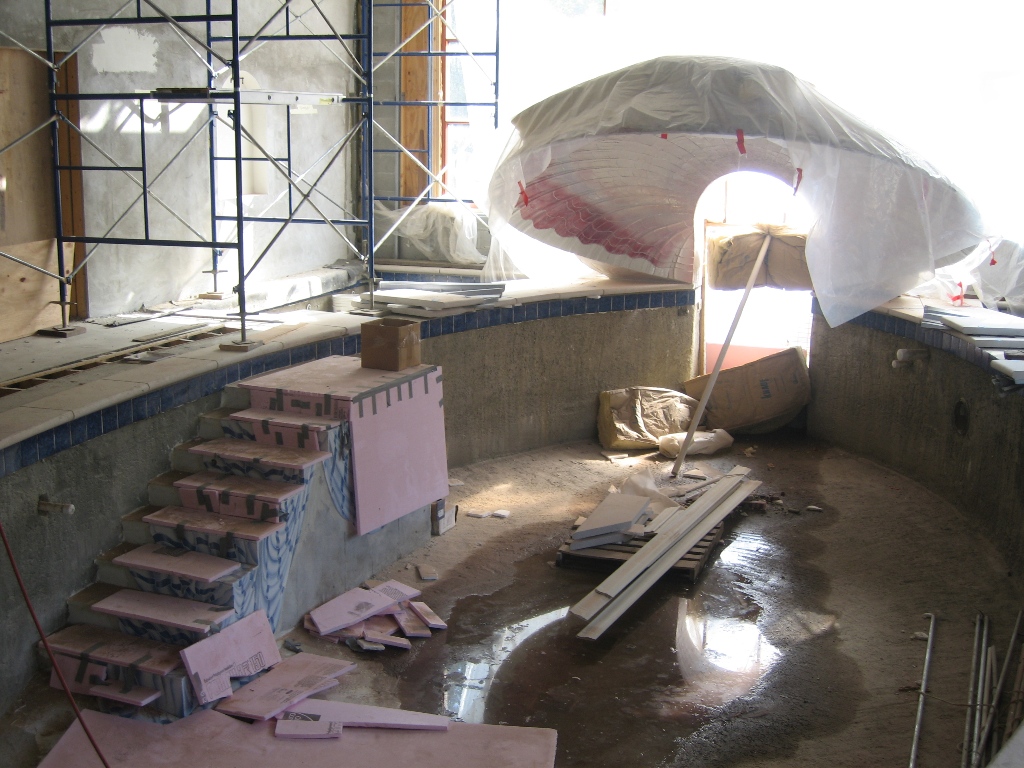 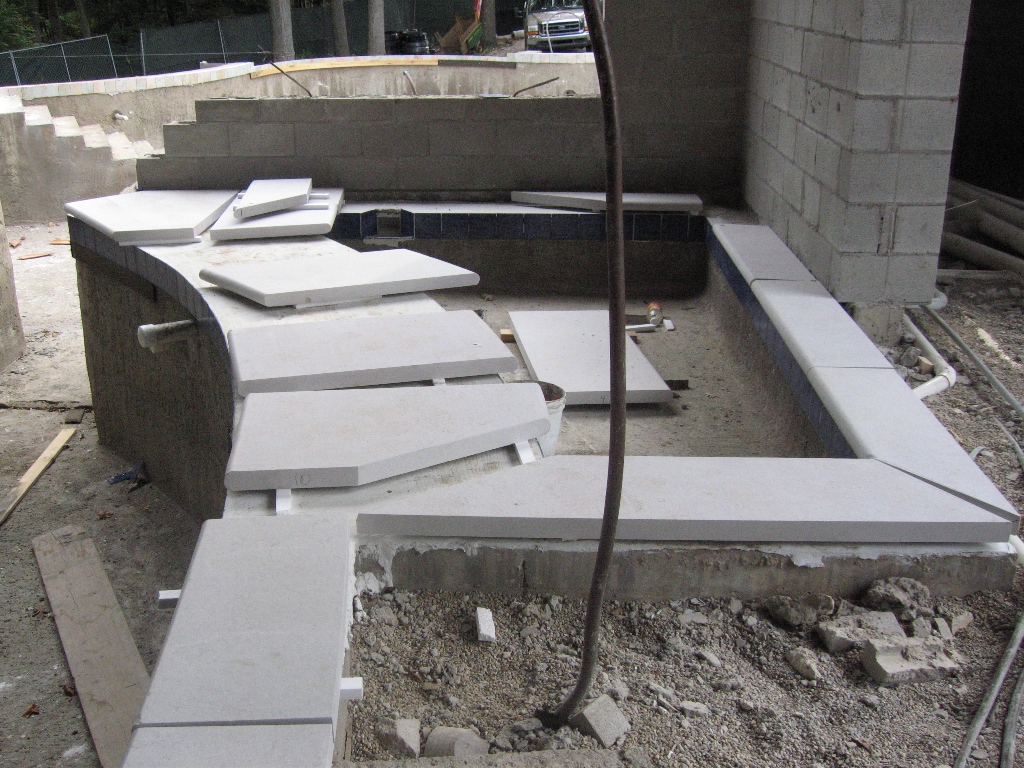 The indoor space is marked by scores of other significant details, but in terms of complexity,none holds a candle to the giant clamshell that hangs over one end of the pool. It had been envisioned as part of the design from the beginning, but no one on the project team could get a handle on exactly what the client wanted. It was one of those rare times when her words and descriptions weren’t quite enough, so it was something we basically tabled until the schedule really left us no choice.

The architect had worked with a couple of firms that specialized in various decorative displays, but the best anyone had come up with to date was an awkward-looking structure with large footings and intrusive supports – something they all seemed to think was needed as a safety measure with what was to be, after all, a big overhead structure.

During a meeting with Craig Bragdy Design’s Nick Powell in which we were discussing various tile details, someone brought up the shell. Powell, almost as an aside, said he’d built something similar in the past; before long, he was quizzing the client to get a fuller impression of her idea.

She left for a few moments. Returning with a large, shellshaped pewter ashtray, she said that this was what she was after – only several times larger and suspended over the pool. Undaunted by the manifest difference in scale, Powell volunteered his company to bring her idea to fruition. A few sketches later, the client authorized him to proceed.

To keep the weight to a minimum, Powell’s company contracted with a Welsh shipbuilder to construct a substructure out of the same material used to make the hulls of ships. They delivered the armature to Craig Bragdy Design, where artists applied the tile and then shipped the completed 13-foot-diameter masterpiece to the job site,where it now rises to a point about eight feet above the end of the pool wall.

The artists in Wales made the shell look as realistic as possible, with a beautiful mother-of-pearl treatment on the underside and a knobby, rough finish on the top – truly spectacular.

The shell’s footings are integrated into the pool shell at the point where the spa and the wading pool meet. We triple-reinforced the connection with rebar and thickened the beam at that point to a three-foot width. This left us with the challenge of finding a way to conceal the various structural elements. Once again,Powell came through by wrapping the base of the shell in a shroud of coral mosaic.

The shell arrived on site in three pieces, and there was great anticipation as they were craned into place – and great relief when everything slid together. The shell was an immediate hit – especially when we turned on low-voltage uplights that illuminated the underside of the shell with a wondrous, shimmering, iridescent glow.

Also beneath the shell is a swim-out channel that runs from the indoor pool and through the deck and wall of the pool house to reach the outdoor pool. Although this detail was easy enough to execute, the spot where the channel passes through the wall involved creation of a movable acrylic panel that turned out to be the single greatest challenge of the entire project.

The mechanism had to be custom designed, engineered and built from scratch and caused sleepless nights for more than a few of us who became involved with it. 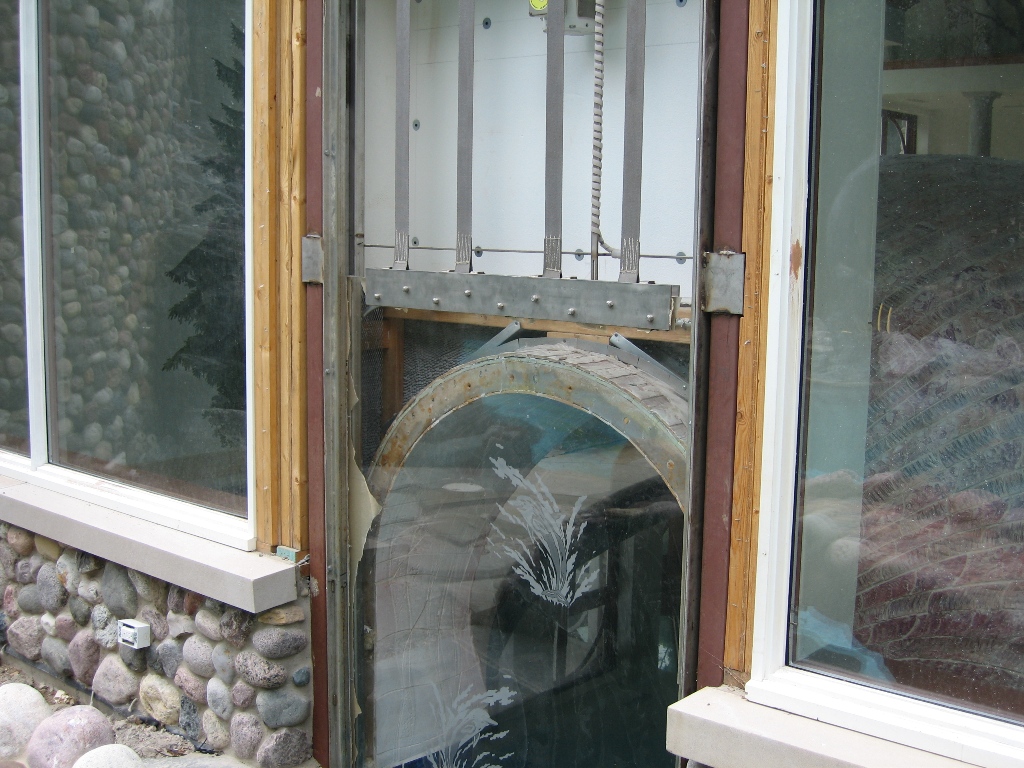 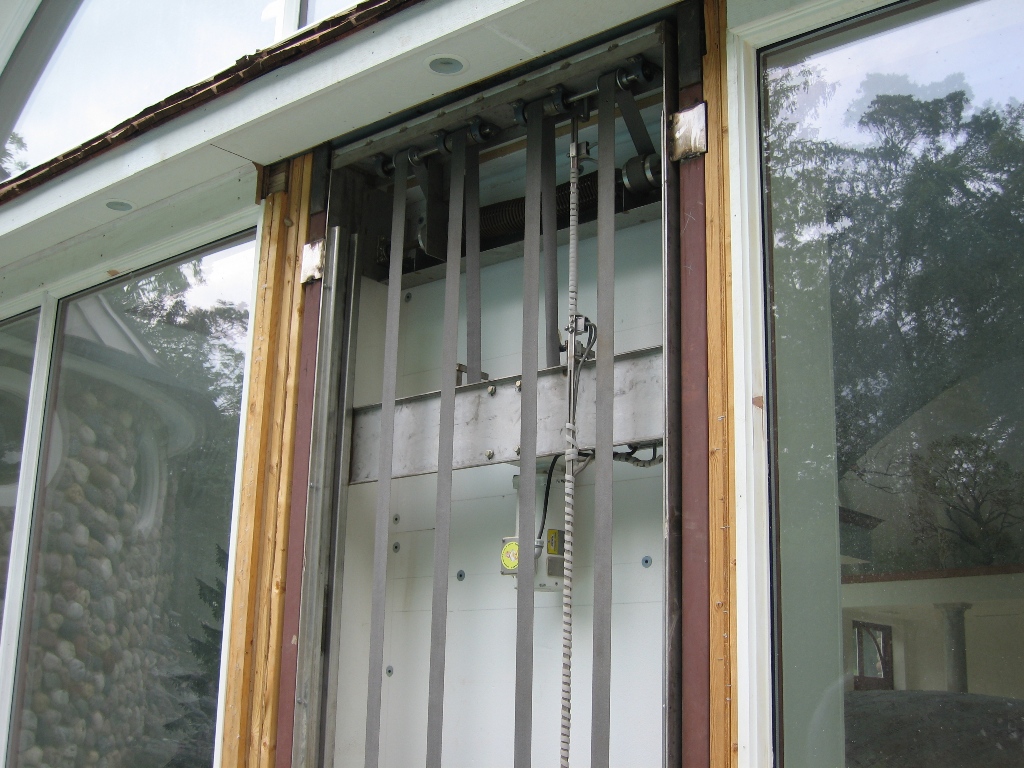 In context, this slidingpanel detail between the indoor and outdoor pools fades in comparison to the stunning visuals found elsewhere in this project, but no other element of this huge project involved more blood, sweat and tears than this one, no matter how modest it might seem in context.

First, it had to move up and down, retract fully into the wall above and run with mechanisms that had to be completely hidden from view. Second, it had to be sturdy enough to withstand the differential loads from water and bather surge pressing against it on both sides. Third, and most challenging of all, it had to be safe: With such a heavy piece of material moving up and down, we had to devise ways to keep it from trapping anyone beneath it.

On top of all that, it couldn’t be a simple up/down,on/off mechanism: Instead, it needed to rise and drop into four positions: all the way down to the floor of the channel; just below the water’s surface so the channel could still be navigated while the acrylic still kept the weather and insects out; to a level just above water level; and, finally, all the way up into the wall.

To make it work,we borrowed some technology from automatic pool covers: If it’s being lowered and meets any resistance, sensors in the system make the panel rise back up; in addition, constant pressure must be applied to the switch to lower the sheet all the way to the bottom. Finally, it’s equipped with tripleredundant internal safety features so it cannot slip out of its track or experience an uncontrolled drop.

Before we reached these solutions, we ran through a host of design iterations and worked with a wide array of engineers and firms – one of which went so far as to build a mock up for us, then told us that they couldn’t make it work and actually gave us our money back!

Finally,we linked up with a local ironworks company in Chicago that put us in contact with Bill Petite, a gifted mechanical engineer who came up with a design that met all criteria and could actually be built. Even then,we had to sign several “hold-harmless”agreements before they would release the system to us.

The irony is that this is perhaps the least visually obtrusive element of the entire project. As a member of the Aquatech group of builders, I’ve run into and heard about lots of extremely complicated project features, but neither I nor any of my colleagues had ever run into anything quite so far off the beaten path as this one. A measure of this complexity is that we spent more than three years from concept to final installation!

Don’t miss our next installment in this series, where we will talk about other interesting features including the swim-in cave, and the custom hand-painted tile from Wales.