21 Aug Making a fashion statement while in your swimming pool

Fashionable Flippers by Mandy Acre, Aquamagazine.com High heels made for the "cat(fish)walk" Paul Schietekat is a Belgian artist who knows how to make a splash in the combined waters of fine art and the pool industry. Originally created in 2006...

20 Aug Will you someday fill your swimming pool with space water?

By Charles Fishman, from Fastcompany.com

Around a black hole 12 billion light years away, there's an almost unimaginable vapor cloud of water--enough to supply an entire planet's worth of water for every person on earth, 20,000 times over.

Scientists have found the biggest and oldest reservoir of water ever--so large and so old, it's almost impossible to describe.

The water is out in space, a place we used to think of as desolate and desert dry, but it's turning out to be pretty lush.

Researchers found a lake of water so large that it could provide each person on Earth an entire planet's worth of water--20,000 times over. Yes, so much water out there in space that it could supply each one of us all the water on Earth--Niagara Falls, the Pacific Ocean, the polar ice caps, the puddle in the bottom of the canoe you forgot to flip over--20,000 times over.

Water Features Can Sooth and Excite from poolfyi.com Water features continue to be one of the most popular design trends for swimming pools. Whether you are looking to add a dramatic centerpiece, architectural accents or the excitement of moving water,...

Tanning Shelf--A Place in the Sun! from Pool FYI.com By any other name, they are the same--tanning shelf, sun shelf, Baja ledge, doggie deck--a delightful, shallow area in your pool to relax and soak up the sun. Sun shelves are...

24 Jul Ever wonder why the water in your swimming pool is blue?

Why is water blue? by Eric Herman, Aqua Magazine When you ask most anyone, "Why is water blue?" they are likely to say it's reflecting the color of the sky. Given that we know that liquid water is a highly...

This is a great article about a really great feature which is available on custom pools. Where To Place Underwater Speakers by Bethany Allen, Aqua Magazine Although underwater speakers have been around since the 1960's, the technology used to make...

We were already well into the construction of a custom inground swimming pool in the Northwest suburbs of Chicago when our client, who traveled frequently to the Middle East, saw something that he just had to have included in his project.  In a hotel in Qatar, he saw a celestial star floor in the swimming pool, and promptly emailed a picture to our salesman.  We went immediately to work on adding this unique and stunning feature to his pool, and the following details the steps we took to install it.

23 Jul Never do this in your in ground swimming pool

This video illustrates something that nobody should ever do in their inground swimming pool.   ...

19 Jul Are you on Linkedin? So is Platinum Pools!

Ever thought about including Linkedin as a research tool when you are planning your new in ground swimming pool project?  You're on Linkedin for your business, right?  Then why not look at the company with whom you are researching on... 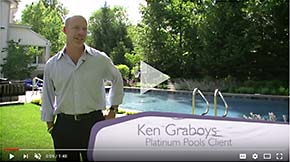